Big Ear Inc. is an organization that has been promoting hearing conversation and providing custom earplugs since 2002. Glenn Hood the founder has researched the best product to provide premium level hearing protection and they have hundreds of options to choose from depending on the specific activity and noise levels that one could encounter.

Big Ear spends most of their time on the road at expos and Bike rallies and the show earplugs are made onsite and sell for approximately $60/pair.

Specialized earplugs with electronics can run up over $2000 per set.

The custom process involves making an ear impression which can then be converted into a plug itself or it can serve as the impression that is sent to one of 5 labs that manufacture on behalf of Big Ear.

A network of authorized providers enable the reach for those shopping online to actually meet with someone face to face and talk through their needs in order to get the right set of plugs.

For straight online purchases a home impression kit was developed whereby a friend helps the individual create the impression with the silicon provided and then the impression gets set to Big Ear for processing.

The creation of an ongoing Industrial Sales Funnel was what we were called to help with. 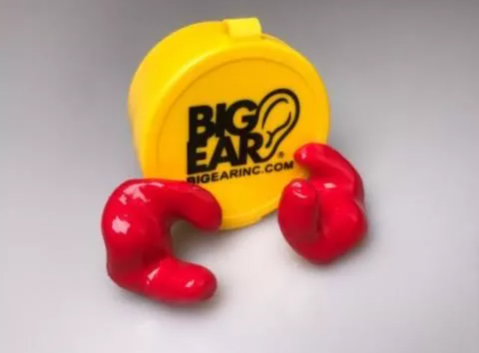 To land large industrial accounts takes quite a bit of work compared to the simple and quick individual expo sales. The approach is completely different since it requires Big Ear to work within a corporate environment where they have policies, procedures, budgets and a purchasing process.

In addition, even though OSHA requirements mandate earplugs in some industrial settings, hearing conservation is not high on the priority list in most organizations.

To overcome this we realized that it would need to begin with establishing relationships over time and that we would need to become relentless in our follow up once we developed interest.

To establish relationship we set up an industrial group and an industrial funnel in the CRM Active Campaign. We created a capture form and created automated communications based on funnel stage and or email click throughs.

Our list was created from a two fold strategy. The first was a list purchase. The second was through a LinkedIn connections strategy.

List Purchase - learning from the last list purchase debacle it was critical to develop a method to convert the names to an opt in status so that we could get them on our list and know that they were legitimate people and that we would not get locked out do to bad data or spam complaints.
LinkedIn - The LinkedIn strategy involved two methods. The first was to export all of Glenn's direct connections to a csv and then import them into active campaign. Since LinkedIn verifies all email we had no problem sending an email from Glenn with an "I could use some help" message.  The help needed was to assist him in reducing noise induced hearing loss and the ask was to be willing to receive some communication from time to time. We gave everyone the option to unsubscribe but the conversion rate was very high 90% plus. This added another 1k contacts to the system.

The 2nd method involved a bit more work. We started by searching for individuals with job titles like safety manager or Director of Safety. This provided over 10,000 plus connection possibilities.  We went back to Upwork to find an admin who would send a personalized connection request with something like "Hi Frank, I see we both share an interest in industrial safety and I would love to connect here on LinkedIn".  Once connected we exported the contact and imported into the industry LinkedIn list. This allowed us to send a thanks for connecting and ask if it would be ok to keep them on the list to get info about hearing conservation. This strategy added anywhere from 100 to 500 contacts per month.

In some cases LinkedIn connections were very happy to connect and were immediately engaging in conversation. After 2-3 direct messages a meeting was set up directly with Glenn to see if there was a way to get a proposal and direct sales contract. This was less than 1 percent of connections.

Email Strategy - Once the list began to grow we needed to figure out a way to stay engaged and begin to offer more opportunities for them to ask questions, request proposals, etc.

We created a monthly newsletter with a message from Glenn at the top and then articles along the side and then at least one product promotion per month. We provided Glenns direct contact information and a link for them to ask questions directly through a form.

Every 10 weeks or so we would send a very direct message highlighting a product with a compelling description and encouraging them to take action and allow us to send them a proposal. If they filled out the form they would be automatically added to the sales funnel and tracked by stage in the process.

The Show - As mentioned earlier when the calls were made the representative asked if they were planning on attending the NSC conference the next year. These tags were added so that we could follow up next year at the conference. Big Ear finalized the decision to attend and obtain a vendor booth at the conference. This is a large venue with thousands of square feet of expo show case.

We needed a way to ensure that we would receive the exposure needed to maximize the dollars invested in the show.

A decision was made to offer free onsite earplugs for those that prescheduled a slot at the booth.

We used an app that allowed us to send our standard Active Campaign email to those that were tagged going to the show. We provided a link that allowed them to schedule directly. In addition we sent an email to the entire list showcasing what we would be doing and inviting everyone to come visit our booth at the conference.

The strategy worked very well. From the first hour we had a constant flow of Industrial Safety directors engaging with the team.  While impressions/earplugs were being made it provided ample time to discuss specific company details and we were able to capture specific information for imputing into our CRM for post show follow up.

In the end the show produced hundreds of warm to hot prospects and over 75 Directors had new earplugs with the unwritten expectation that we would be asking for input and how we could implement a pilot program to prove the concept with their company.
​Other Content

We created a landing page to be used for direct posts on social media and direct advertising.
The message was compliance based and we created an Industrial Hearing Conservation Kit that we offered for free if they opted in to request it.  The resource link was automatically sent and the individual was added to the sales funnel.  They received a series of follow up emails providing more information regarding Big Ear and how they could partner to provide

The Proposal - to overcome objections regarding price we came up with a calculator that allowed us to enter the cost of disposable earplugs, number of employees, number of throw away earplugs used per day and then compared that to a one time expense with zero maintenance expense. 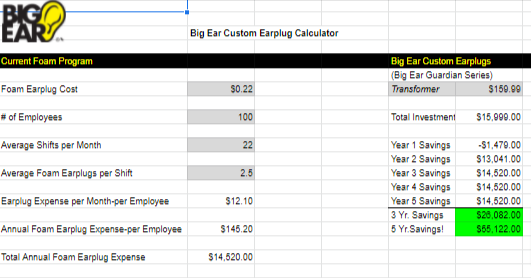 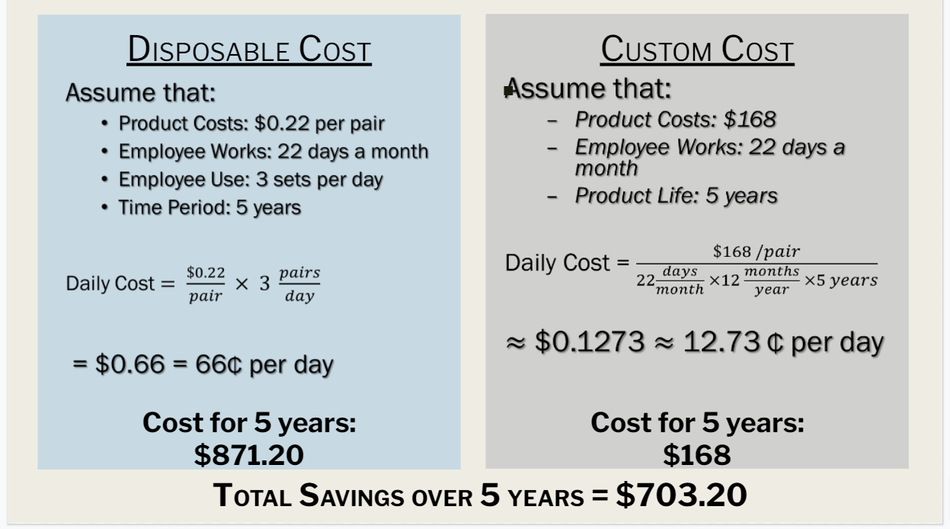 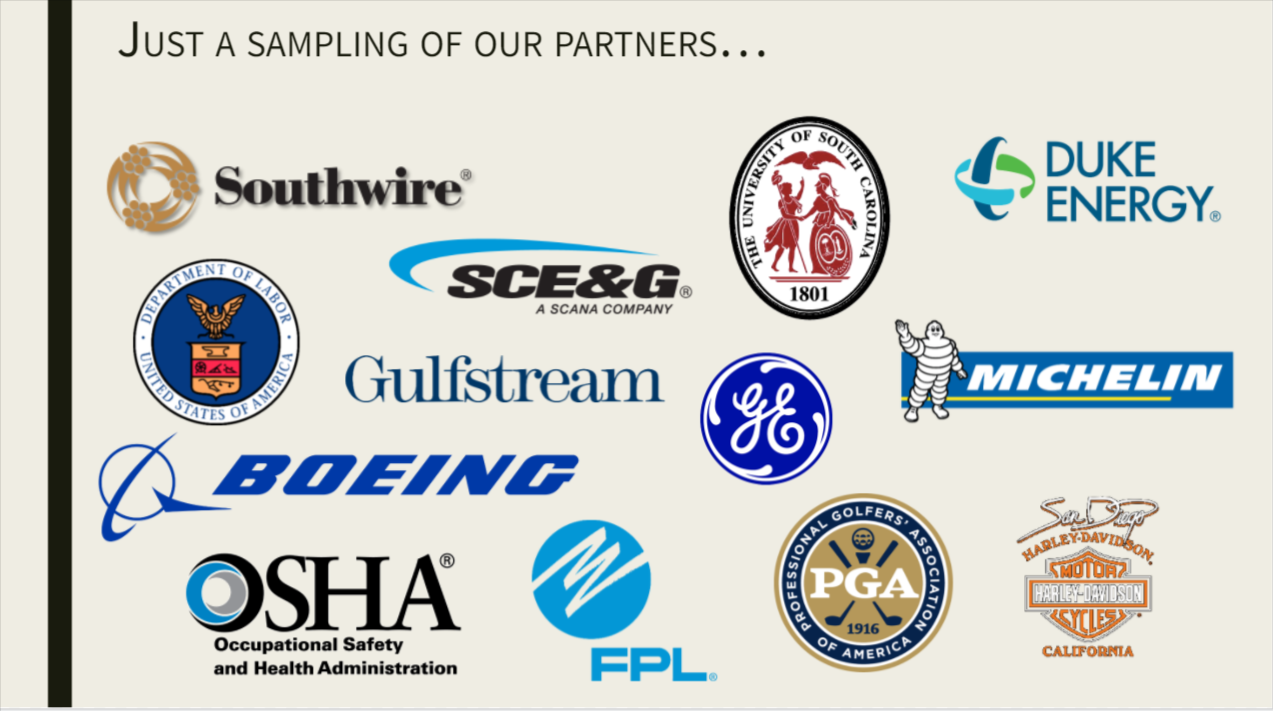 Some of the existing accounts added credibility to the proposal. 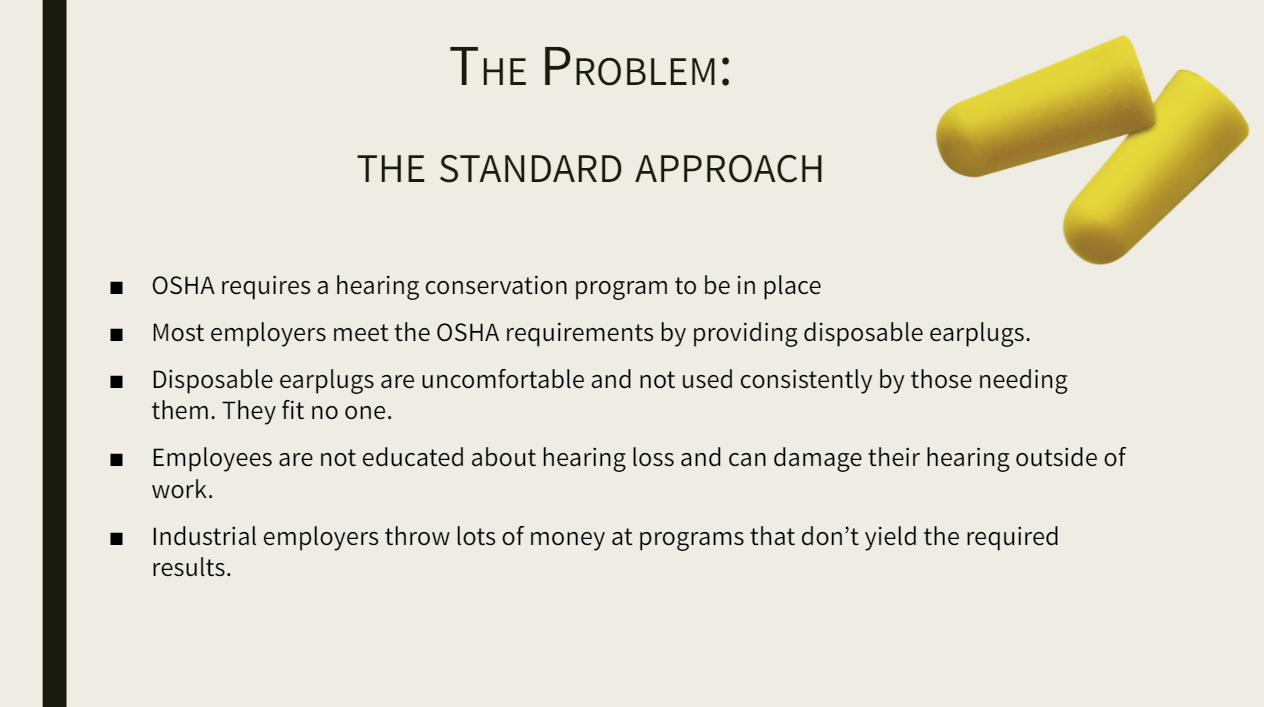 OSHA has specific requirements regarding hearing conservation. Big Ear custom plugs provide a premium solution for companies that really care about their employees. This message came through best with a one on one meeting with Glenn. 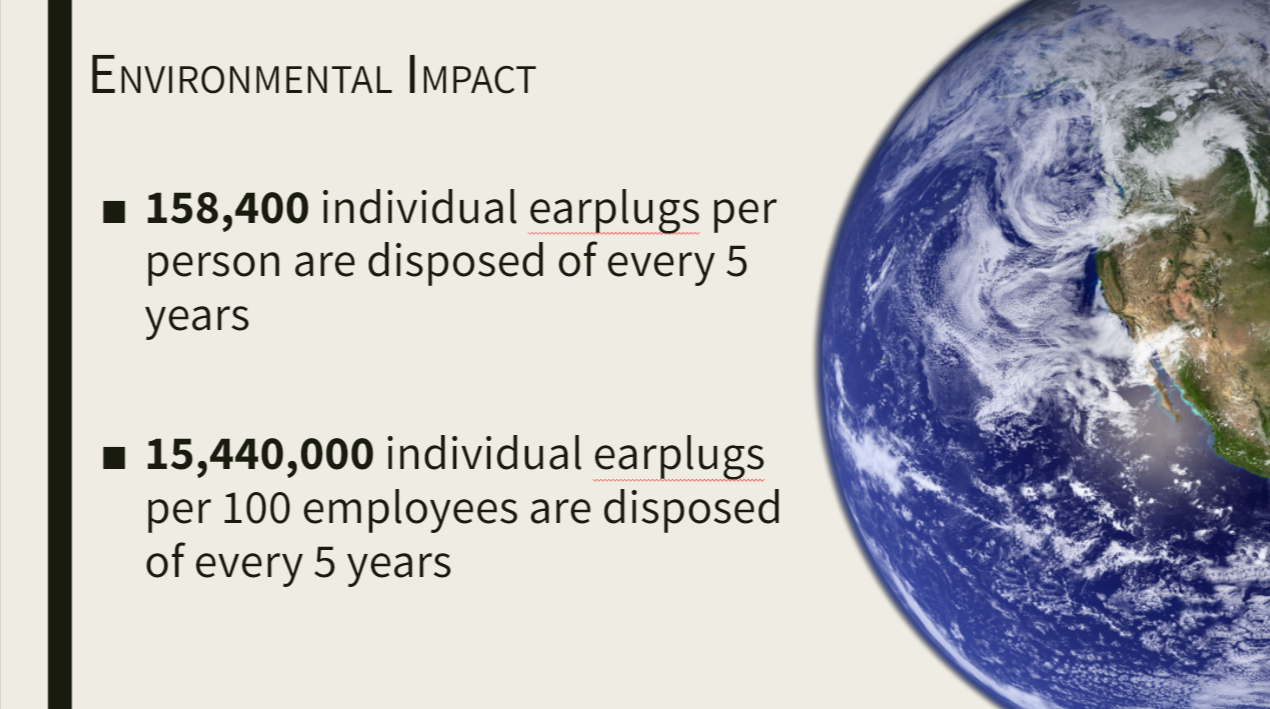 With increased awareness of global environmental impacts Big Ear attempted to provide a visualization of what millions of disposable earplugs was doing to corporate sites.  On occasion a picture would be taken on site showing a site littered with bright yellow and orange earplugs. Those images were effective in helping to justify the switch.

The landing page was intended to drive opt ins in exchange for an Industrial Hearing Conservation Kit.